2012 was a really busy year at the Ely Stage Stop and Country Museum (ESSCM). Docents greeted visitors each weekend day from 11:00 to 03:00. The docent pool continued to grow and now includes people of many diverse talents. We have woodworkers, seamstresses, floral arrangers, bakers, computer geeks, historians, and barn builders to name just a few. Displays change as new acquisitions are received.

In April, Congressman Mike Thompson visited the museum as part of his Lake County Tour. He saw first hand how all involved with the museum have contributed to preserving a part of Lake County history. Fulfilling a promise made during that visit he returned to the museum on October 15 to present a United Sates flag that was flown over the Capitol Building in Washington, D.C.

The Museum has become a destination for social and educational events. On separate Saturdays in May the museum welcomed the Lake County Model A Club and a Science and Museum Camp put on by the Lake County Children’s Museum of Art and Science. In June the Lake County Historical Society held its annual picnic on the grounds giving members and guests a special opportunity to learn about the County’s colorful history of highwaymen as well as history of the Ely Stage Stop itself. At the 2011 Lake County Wine Alliance Auction, a Wildhurst Winemaker Dinner using ESSCM as its setting was purchased as a silent auction item. That dinner was held at the Stage Stop on July 22 and proved a huge success.

Partnering with the community took hold this year in three forms. One was with the Clear Lake Trowel & Trellis Garden Club as they took the ESSCM on as one of their newest Civic Beautification projects. Phase One has been completed with the construction, installation, and planting of four beautiful planter boxes just off the museum porch. This project will benefit the community for many generations. A second partnering was with this year’s 20th Anniversary of the Kelseyville Pear Festival inside the Pear Pavilion. Our authentic stagecoach was on display and docents were available during the day to answer questions about the ESSCM facilities and plans for the future. The third partnering was with Wildhurst Vineyards as a Fall Farm to Table Winemaker Dinner was presented on October 20th as a benefit for the stage coach which was on display for the diners.

And let’s not forget our latest news! Our long awaited barn raising has begun.
Over the weekends since August 18, weather permitting, volunteers have met at the museum site to begin the first display barn. The 2000-square-foot barn will house many of the Lake County Historical Society’s artifacts. The Carpenter’s Star quilt patch, donated anonymously through the Lake County Quilt Trail Project, will grace the side of the completed barn. 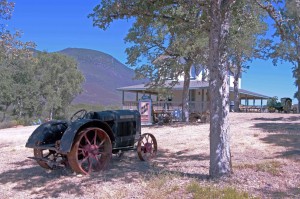